James Surls and the Evolution of the Flatbed Suite 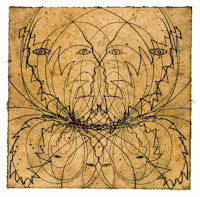 It was 1999 and one of Texas’s major artists, James Surls, was making a move from Splendora, Texas to Colorado.  He and his family had decided to relocate to Basalt, Colorado near the Anderson Ranch Arts Center in Aspen where he and his wife, Charmaine, had been teaching and working during the past few years.  As his family went before, James stayed behind to close up his studio at Splendora near Houston. James and I had been talking about making a suite of prints and so during this time of transition, he decided to take the time to come to Flatbed. 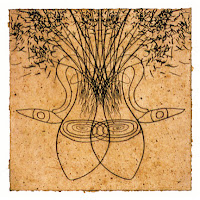 However, there was a stipulation.  James had a request, “I want to make this suite only if you can make this print transparent enough so that if we print on both sides we’ll be able to see both sides at once.”  As Master Printer, I had not done this before but, on a hunch, I tried soaking Asian papers which are lightweight in what is known as “straw-hat varnish,” an alcohol-rosin solution.  It worked beautifully as long as the solution was weak. Our concern was whether this solution was archival.  One of my printers at the time, Pat Masterson, had a cousin working for Sotheby’s and we learned through her and other research that prints from the 1800’s were varnished with the same solution and suffered no degradation. 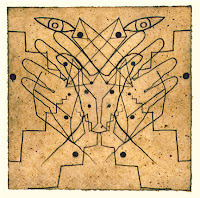 James came to Flatbed and drew using soft ground on the square copper plates.  It is always a pleasure to be there when he draws.  He draws with such conviction and sureness; there is no hesitation and the drawing seems to fall fully formed from his hand.  After the first drawing was complete, we etched the copper plate and printed proofs onto lightweight Thai Chiri paper, a favorite Asian paper we had previously used with James.  It is of natural color with organic bits of the chiri bark. We printed the same plate on both sides of the paper.  While James watched, we soaked the print with the varnish and miraculously, the mirror image from the back appeared.  The new image is the combination of the image and mirror image. As James explained, the image was both in two places and in one place at the same time.  It became our quantum physics “the cat is dead and in the box, and the cat is not dead and not in the box” print.  It expressed deeply what it is like to be here and there at the same time; to be in Colorado and Texas at the same time. 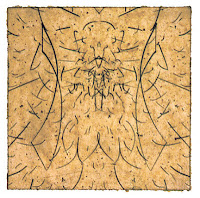 Surls went on to draw and etch a total of five plates for the suite which we now call the Flatbed Suite:  Giver, Shirt, Bridge, Faces, and Hands. The transparentized and colléd etchings were printed in editions of 21.  All are available as suites of five or individually.