Song of a Red Winged Blackbird 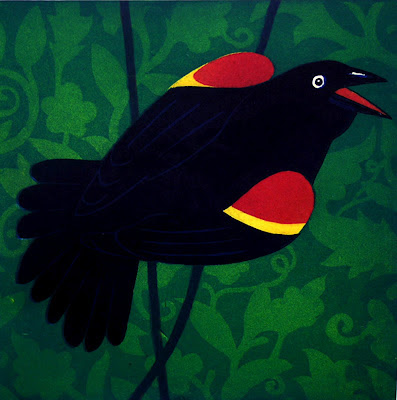 There is a red winged blackbird and it is perched on a bare brown twig. Behind him is an arabesque riot of dark and lighter green foliage.  He has been discovered while in full song and sees us mid-note.  He holds us with his gaze.  Billy Hassel created this beauty of an etching at Flatbed and it was editioned in 2007.

When a painter who loves color as much as Billy Hassell comes to make an etching at Flatbed, a separate copper plate must be etched for each color. This can be complicated but the results can be rich.

Billy Hassell is well known as a painter and lives in Fort Worth, Texas.  When he came to Flatbed to work he had images of richly colored birds on his mind.  As a painter, he had been creating large paintings of birds and wanted to create unique multiples of one of his abstracted images in color.  We decided on a square format featuring his image of a bird, a red winged blackbird, using 12” x 12” copper etching plates. Making a multiple plate/color etching is similar to building an image one color at a time. This particular etching technique required us to use an aquatint process.  In this case, Billy painted the shapes we needed to etch directly onto the plates and we used a technique called “sugar-lift aquatint” to create the four plates.  His abstract rendition of “Red Winged Black Bird” started to take shape as we etched yellow, red, blue and black plates with aquatinted areas that would overlap and build the final image.  The floral green background of the image was achieved with blue overlapping yellow, the violet with blue overlapping red, and so on.  In trying different printing papers we discovered if we printed on an Asian Kitikata paper, we could achieve another depth of color. This way of printing required an additional step in which the Asian paper was collaged onto a heavier backing paper to give it support.  Billy signed one of these prints as the B.A.T. which stands for “Bon A Tier” a French term meaning  “good to pull” or good to print.  Our job as the printers was to make the multiples in the edition match this signed print.  We agreed to do an edition of 40.
The printing took a team of four printers including myself, Teresa Gomez Martorell, Lucy Flores and Amy Spencer.  Each printer took charge of one of the four plates and a registration system was devised to make sure that the colors registered precisely.  Although this system was a little out of the ordinary, it worked.  I made a video that might give you a little insight as to how this was all accomplished.
The Making of Red Winged Black Bird

Despite the complications, it all felt worthwhile when those forty impressions were finally finished and signed by Billy. The Blackbird still sings and most have flown, but there are two impressions left.
Posted by Flatbed Press at 10:24 PM