A Is For Artist Allen 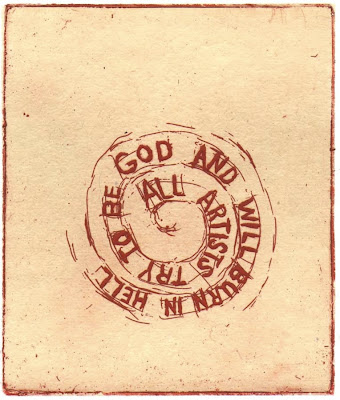 If I were to write an alphabet book for artists, this image would be the first page.  This is the etching "All Artists Try To Be God And Will Burn in Hell" by Terry Allen.  Terry, who has worked at Flatbed on two separate occassions, did this print in August 1998.  It was his second time around at Flatbed.  He approaches printmaking with a very direct approach.  He knows what he wants to say or draw and uses the most effective way to go about it.  In this print's case, Terry had been playing around with this image for a while.  He had even created a branding iron and burned it onto various surfaces!  For you Nauman savvy collectors out there, yes, he just might be poking a little fun at Bruce.  Terry's supreme sense of irony responds to Nauman's "The True Artist Helps the World by Revealing Mystic Truths."  Allen, having grown up in the Bible Belt, gives us the other side of the coin.

In this case, Terry scribed the image in reverse onto a grounded copper plate which I etched very deeply.  It took several hours.  Terry would say, "Etch the hell out of it."  I think he meant that literally.  The plate was proofed in several reds but a deep, complex "blood" red was chosen.  The plate was etched so deeply that when printed, the ink stands on the surface of the paper.  He chose a skin colored Japanese paper (no accident there) called Okawara. We printed it as a chine collé with a large backing of Rives BFK in an edition of 21. (Allen likes the number 21.)   Flatbed published this print in 1998, and we still have a couple of impressions in stock.

Posted by Flatbed Press at 4:13 PM