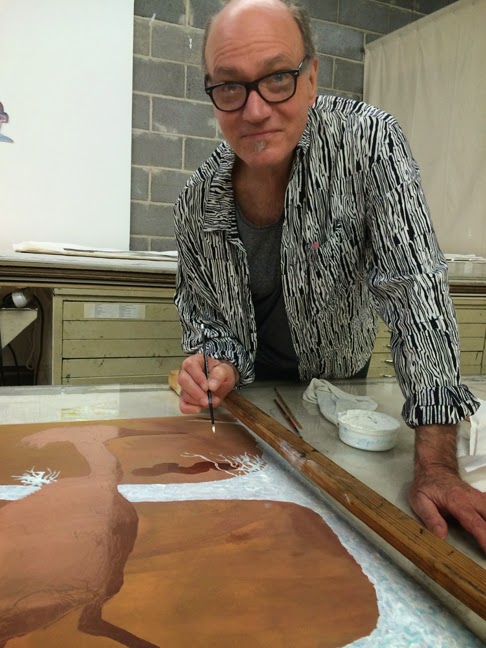 "I want to make seven Texas birds," Frank told me on the phone.  We had been discussing a large suite of Texas birds that he was planning to create as etchings at Flatbed starting in the late spring of 2014. We were brainstorming about the project.  Frank wanted to work on a larger format (image 30" x 22") and in full color. We specialize in etchings at Flatbed and know that color etchings have the luminous color that other media can't touch.  My printer's brain was whirling because I knew Frank's drawings and paintings and I knew that his idea of color meant COLOR in a big way.  Color etchings are tricky to create, since every color for an image needs its own copper plate created by the artist, and this would be our first color etching with Frank.  We had printed his huge woodcuts and two smaller relief prints, and I knew that Frank was an enthusiastic and energetic artist who would be able to jump through the hoops we'd throw for him to make this marathon etching project possible.

Starting in February of this year Frank began his preparatory drawings to plan for the birds.  He claimed at one point to get "bird block" when he wasn't sure which birds to pursue. That didn't last long and by the time he came to Flatbed Press at the beginning of June for the first week of collaboration he had over eight images developed in sketches that would be used to inspire the etchings he created in the shop.   During the week of collaboration Frank proved to be a natural at drawing on the copper plates using a technique called "soft ground."  He could be as gestural with wide crayon like marks as he wanted and not be constrained to thin, laboriously drawn lines.  Since he is as familiar with using brushes as crayon drawing tools, he also used sugar lift aquatint techniques to add brush marks.  The week was a success and we had the beginnings for seven images:  Horned Owl, Golden Crowned Heron, Black Necked Stilt, Chicken Hawk, Ruby Throated Hummingbird, Snowy Egret and the Pileated Woodpecker.  Frank was scheduled to return the next month and draw and etch the colors for each of the birds. 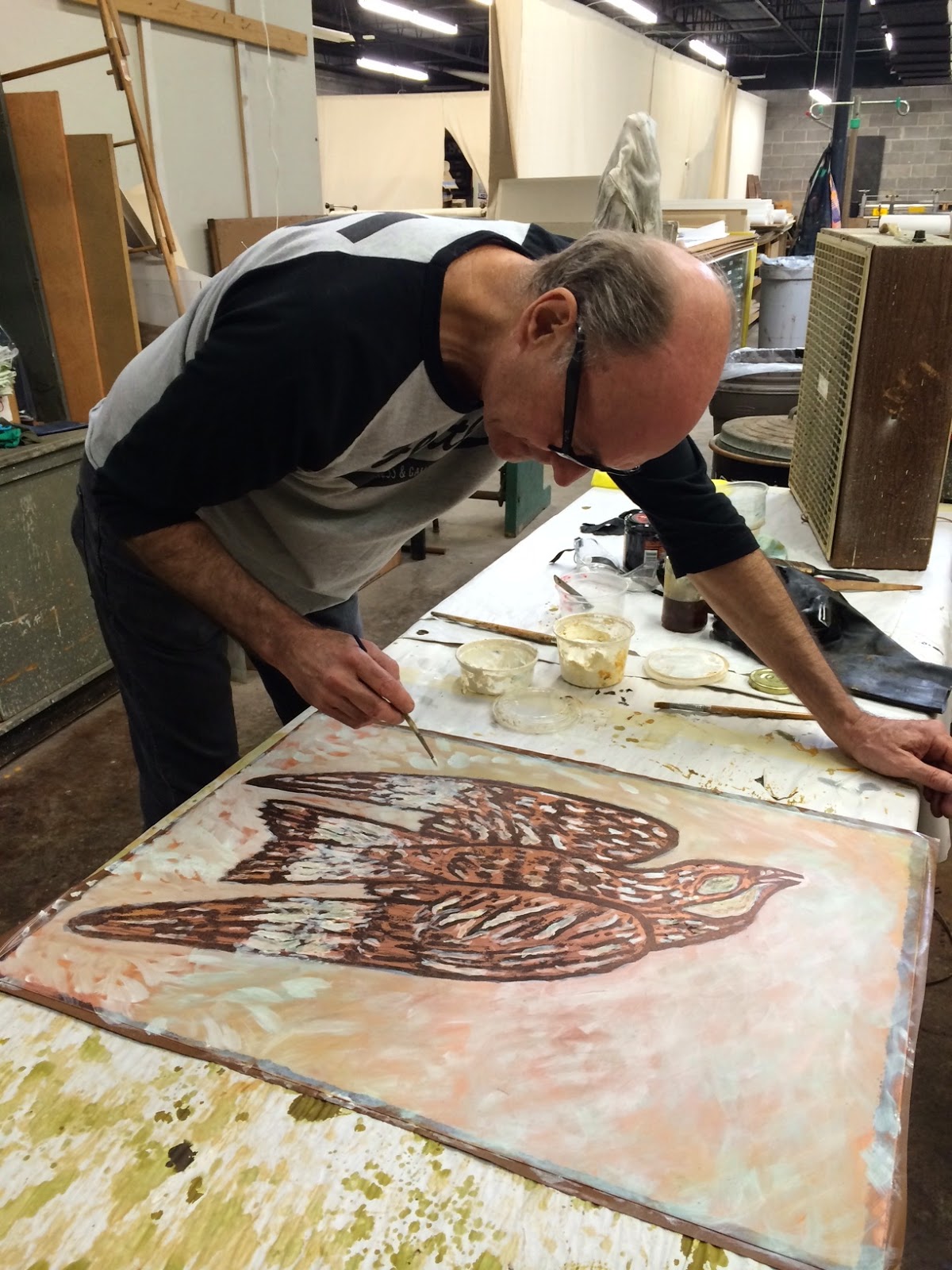 In July, Frank's second week at Flatbed, we were able to get all the plates completed and proofed to approve for Golden Crowned Heron, Horned Owl and Black Necked Stilt.  In August Frank finished Ruby Throated Hummingbird, Chicken Hawk and Snowy Egret leaving the seventh, Pileated Woodpecker, and last but not least, a Texas Green Jay as the eighth in the series to complete.   On October 24 Frank finished the work of developing all the plates, twenty eight copper plates in all, proofing them for color and approving the eight for printing in editions of twenty four.

We are underway creating the finished editions for each of the birds.  Enjoy a peek at the development stage of these etchings when Frank was at Flatbed's studio working with Tracy Mayrello, Cordelia Blanchard and myself.

Impressions are still available from these small editions.  Contact us at Flatbed to reserve one or the whole suite. Finished editions are to be signed in April. 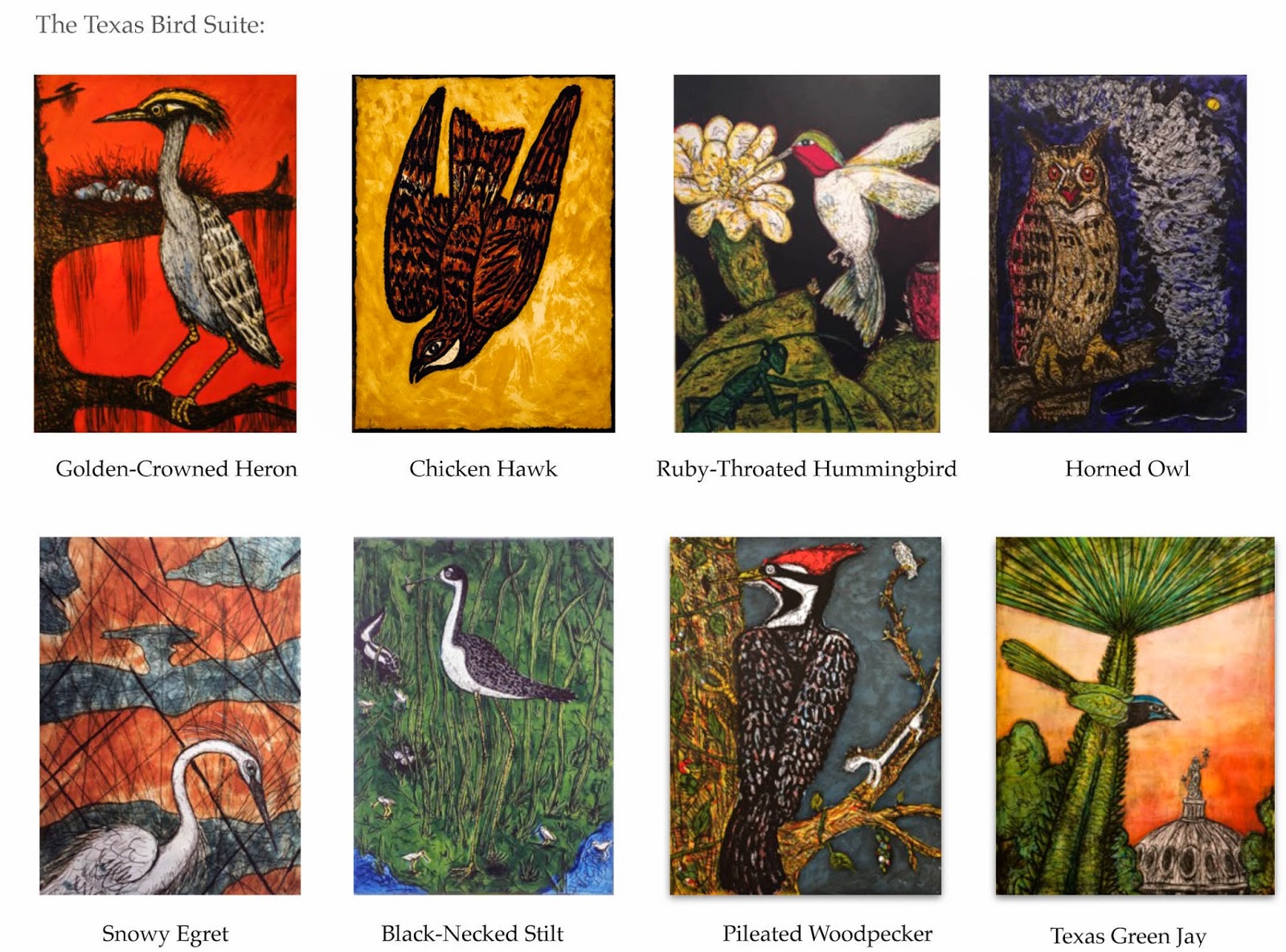